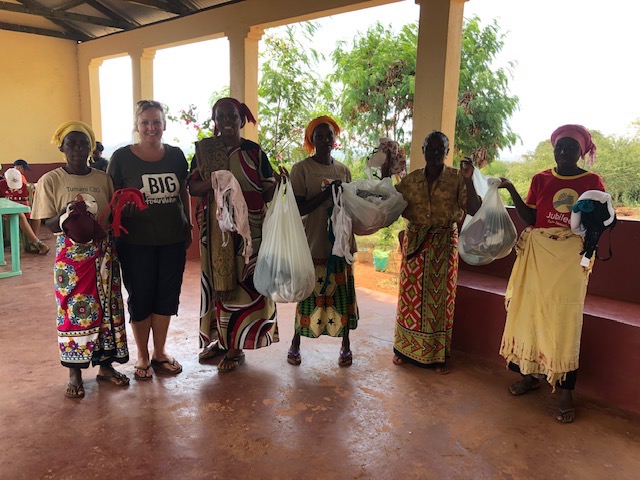 A story about Collective Individualism in the UK & Kenya

I hadn’t heard the term “collective individualism” before this year’s International Women’s Day. But I realise I have seen it in action over the last year: women and girls (and some men) uniting for the common purpose of supporting other women and girls 5000 miles away.

It was October 2018 and our third trip to Kenya for the BIG Foundation (staying at Camp Tsavo with Camps International). Our friends, Lis and James Sheppard had joined us with their family and efforts were concentrated on finishing the new nursery we were building at the local primary school, the Foundation’s first community project in Kenya. As is customary for volunteers visiting Camp Tsavo, we spent a cultural day with Mercy Joshua, or “Mama” Mercy as she is affectionately known, and the Tumaini ladies’ group to learn some local crafts. Mercy made quite an impact.

Mercy moved to the Maungu area of Tsavo in 1998. After losing her father early in life she developed independence and a passion for helping orphaned youngsters.

In Maungu it was traditional for families who had lost a loved one to blow a whistle to signal their relative’s passing so members of the village could visit to pay their respects. When Mercy first arrived, AIDS was a big problem and she remembers hearing a whistle blow every week. Shocked at the frequency – with more children being orphaned and babies born HIV positive – she realised the community was not educated about the issue at all. And at every funeral she observed the ladies sitting separately, seemingly not allowed to talk.

The community faced other challenges too. Most men were out of work and struggling to put meals on the table so resorted to hunting bushmeat. With harsh climatic conditions, subsistence farming was not a sufficiently reliable source of food or income.

Frustrations often spilled over and Mercy heard stories of women being beaten by their husbands. Her gravest concerns were for the girls who she learnt were being married off as young as 10 or 11 years old. They were having babies before they were fully developed and growing up without an education.

Enough was enough. Mercy rallied the women. She told them:

“You need to speak up. If we come together with one voice, we will be heard!”.

Mercy was quick to identify the overriding issue:

“I had moved to a place where women were silent. Poverty was a big problem but without education women were not empowered to do anything to change their situation.”

So – Mercy set up her first ladies’ group, the Umani CBO (community-based organisation) down the hill from her house. It quickly grew in popularity and soon women were walking 10km to take part. To enable women throughout the region to easily join groups, Mercy set up more CBOs closer to their homes and villages as far away as 20km (the distance she could walk to and still manage to get home from within a day). There are now 25 in total, including the Tumaini ladies’ group, that provide a support network for hundreds of women.

Mercy started teaching the ladies to read and write and basic accounting so they could budget properly. She encouraged women to use their skills to create items that could be sold to earn them money – beaded jewellery, baskets, cloths, wooden animal carvings, and elephant dung paper, for example. After all, “if their husbands cannot provide, they must provide for their families”, she said. Those without skills were taught new ones – using sewing machines, hair dressing. And, with Camps International’s help, she set up a shop for them to sell their creations.

Mercy began to sit on committees and boards of local schools. As well as Camps International, she worked with Wildlife Works and when World Vision moved in to the area she was chosen to represent the community which firmly established her as a leader. With their ever-louder “one voice”, Mercy and the ladies set about tackling the serious issues affecting their communities.

Mercy educated women about the transmission of AIDS. She stopped the young girls earning money as prostitutes from the transcontinental truck drivers who stopped overnight on the main road. She tackled the stigma associated with being HIV positive and she counselled families who were devastated by the disease. She took out loans to put orphaned children through school and she lobbied for a dispensary to be installed in the local community so patients had access to medicines and support.

Mercy empowered women to take a stand against domestic violence and the ladies’ groups collectively confronted abusive men in the village. On one occasion she threatened a lady’s husband with a trip to court if he persisted with his behaviour.  Her relentless campaigning for girls under the age of 18 stopped underage marriage in the local community all together.

“If there was one thing we could bring you from the UK, what would it be?”

Mercy went on to explain why bras are so valuable in her part of Kenya: not only do they protect the modesty of adolescent girls, they give all women a better chance of getting jobs. In an environment where there is 90% unemployment and over 65% of people live in poverty, more and more women are looking for work to help make ends meet. They are taken far more seriously if they wear bras to job interviews as they are deemed to be more educated.

She explained to us:

Lis and I came home to the UK and shared our idea to launch a bra appeal with friends. Katrina Sexton spread the word in Berkshire and before long was kindly driving the length and breadth of the county to collect bras. Katrina said:

“I was bowled over by the number of people who contacted me wanting to support the appeal. I could not have anticipated the positive impact the Support Kenya project would have on some of the generous people donating bras. I heard immensely humbling stories from those recovering from illness, some who had lost loved ones and others who felt they had regained a sense of purpose by responding to a “call to cause”. It was truly amazing”.

Last year, a month before I was due to return to Kenya with our first corporate volunteers, I posted an informal message on Facebook about the appeal. The response was incredible. Bras arrived by post at work and at home, I returned home to find bags and boxes full of bras in my porch.  Work associates, friends, their families, colleagues and friends, and social media followers, many of whom I didn’t know, contributed. Collections were organised by small independent businesses and national company headquarters alike, shops, hairdressers’ and schools. A café owner in Ascot even set up a collection point in her coffee shop.

The plight of women and girls in Kenya struck a chord with women and girls closer to home and their kindness and generosity was overwhelming. We estimate that approximately 2000 bras were donated to our “Support Kenya” appeal last year from all over the UK and as far afield as Belgium, Spain and the USA. Mercy wasted no time distributing them to the 500 women she supports through the ladies’ groups and their daughters.

One volunteer who met Mercy for the first time in June last year said:

“Mama Mercy is a force of nature. Her drive to empower women and improve the lives of the people in her community would be an inspiration to men and women of all ages, anywhere in the world.”

Mama Mercy has empowered women in her community in Kenya to come together to have a voice. There is no one I think of more when celebrating International Women’s Day!

We would like to thank every single person who has donated bras to the ladies’ groups in Kenya. And a huge thank you to the Camps International team who so kindly transported the boxes of bras we sent by airfreight to Mercy.

Finding Purpose A World Away from the C-Suite